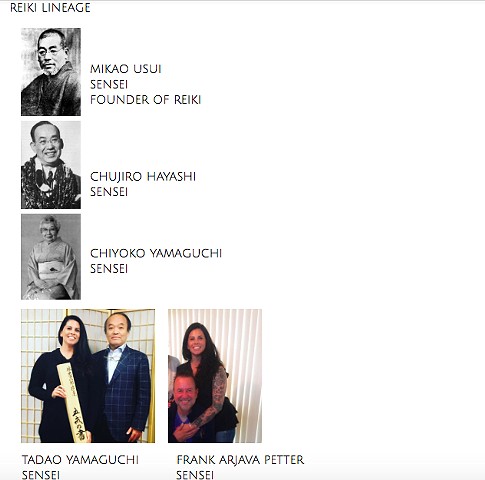 Mikao Usui Aug 15th, 1865 - Mar 9th, 1926 Founder of Reiki. After a long search to obtain "the state of complete peace of mind", he reached the enlightenment and understanding of this healing ability in 1922. It was then he began the "Shin Shin Kaizen Usui Reiki Ryoho"- which translates to "For the improvement of body and mind, Usui Reiki healing method Association".During his life time, he taught Reiki to over 2000 people and 20 of these students reached the Shinpiden (mystical teaching) level. One of them is Hayashi Chujiro.

Chijiro Hayashi Sep 15th, 1879 - May 11th, 1940 A disciple of Mikao Usui. Became Shihan (teacher) in 1925. As a former naval physician, he employed Reiki to treat his patients. He made his branch, "Hayashi Reiki Kenkyu-kai" at his master Usui's suggestion, but kept the way of teaching as "Usui Reiki Ryoho". He played a major role in bringing Reiki oversea by teaching Mrs. Hawayo Takata, the grand mother of Western Reiki.

Chiyoko Yamaguchi Dec 18th 1921 - Aug 19th 2003 Learned Usui Reiki Ryoho from Chujiro Hayashi in 1938. Since then, she practiced Reiki on a daily basis with her relatives and friends for 65 years. In 1995, she realized Reiki has spread to the world for the first time. In 1999, she established the Jikiden Reiki Institute with her son, Tadao Yamaguchi and taught Reiki in the same way she had been taught, based on the old materials, notes, photos, and memories.

Tadao Yamaguchi 1952- Son of Chiyoko Yamaguchi and grew up with Reiki in his daily life since birth. Tadao lives in Japan and teaches Reiki worldwide. His mission is to spread Reiki as he believes this new millennium is the century for humanity and many people are in great need of healing. Mr. Yamaguchi is the President of the Jikiden Reiki Kenkyukai (Institute) in Kyoto, Japan.

Frank Arjava Petter Aug 24th 1960- Embarked on his Reiki journey while living in Japan in 1992 and has written many books on the history and culture of Reiki. Acknowledged worldwide as a renowned Reiki teacher and a pioneer in the revival movement of the original Japanese Reiki. Since 1997 he has traveled all over the world teaching Reiki and is the Vice President of the Jikiden Reiki Kenkyukai (Institute).